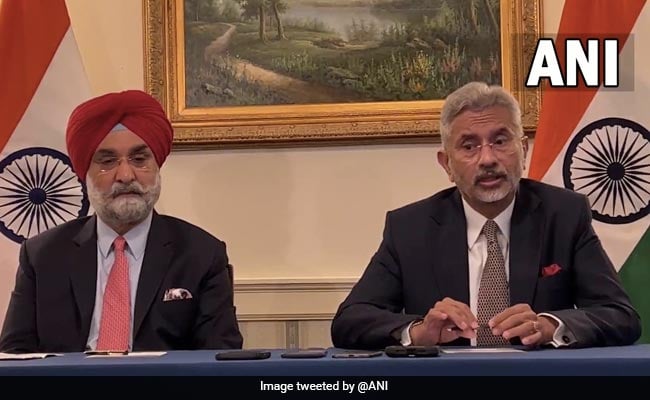 Exterior Affairs Minister S Jaishankar mentioned on Wednesday that human rights subject was not a subject of debate through the India US 2+2 ministerial assembly this week, as he asserted that every time there’s a dialogue New Delhi won’t be reticent about talking out.

“On the human rights subject; no, we didn’t talk about human rights throughout this assembly. This assembly was primarily centered on political-military affairs,” Mr Jaishankar instructed reporters as he concluded his journey right here, which was primarily to attend the India-US 2+2 ministerial together with Defence Minister Rajnath Singh.

At a joint information convention on Monday, Secretary of State Antony Blinken had mentioned that the US is monitoring some current “regarding developments” in India, together with an increase in human rights abuses by some authorities, police, and jail officers. The joint information convention after the two+2 dialogue was addressed by Mr Blinken, Mr Jaishankar, Mr Singh and US Defence Secretary Lloyd Austin.

Responding to a query, Mr Jaishankar mentioned whereas the difficulty of human rights was not mentioned through the present assembly, it has come up prior to now.

“It’s a topic which has come up prior to now. It got here up when Secretary Blinken got here to India. I feel if you happen to recall the press briefings after that I used to be very open about the truth that we had mentioned it and mentioned what I needed to say,” he mentioned.

“So let me put it to you this manner so that there is readability about the place we stand on this matter,” he added.

“I’d let you know that we additionally take our views on different folks’s human rights state of affairs, together with that of america. So, we take up a human rights points after they come up on this nation, particularly after they pertain to our group. And actually, we had a case yesterday…that is actually the place we stand on that,” he mentioned.